STRABAG Real Estate GmbH (SRE) ranks among the leading project development companies in Germany and Europe and is part of STRABAG SE, a European-based technology group for construction services as well as a leader in innovation and financial strength. In addition to its headquarters in Cologne, SRE is represented with locations in the main German business centres, in Poland, in Austria and in Romania. The company’s range of services covers all phases of project development – from initiation, planning and realization, right through to leasing and sale. SRE’s wide-ranging portfolio includes the development and realization of office, business and commercial real estate projects, also covering housing, hotels and special-type properties. In addition to its own project developments, the company offers its range of services also to third parties. Since its establishment in 1965 the company has completed real estate properties with a volume totalling over 7 billion Euro and including such prestigious projects as the MILANEO in Stuttgart which was named “Best Futura Mega Project” at the 2013 MIPIM and “Best New Shopping Centre” at the 2015 MAPIC, the UPPER WEST in Berlin, the Dancing Towers in Hamburg, which was awarded with four renowned national and international property awards, and the Forum Mittelrhein in Koblenz which was proclaimed winner of the 2013 immobilienmanager Award. 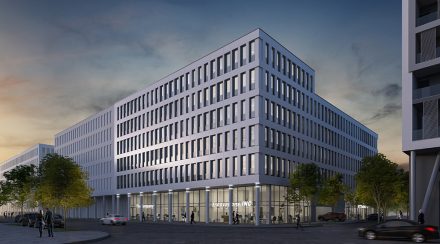